Laura Ingalls Wilder (February 7, 1867 – February 10, 1957) began her children's writing career when she was well into her 60s.  The books based on her life in Pepin, Wisconsin; Walnut Grove, Minnesota; Indian Territory (Kansas); and DeSmet, South Dakota have been the subject of numerous articles and titles.  William Anderson is a noted Wilder expert; but Iowa has its own expert in Sarah S. Uthoff who frequently writes about Wilder on her Trundlebed Tales site.

Laura Ingalls Wilder's books were based on her childhood and early years on the prairie, her ages in various locations have been adjusted, and locations were moved or Laura depicted as being a different age than she really was.  This moving around of the facts completely left out the year-and-a-half or so (1876–1877) that Laura and her parental family lived in Burr Oak, Iowa.  But the family did live in Burr Oak and there is much to discover about the family's time there.  None of Wilder's published writings for children included the months spent in Burr Oak but she did write about life in Burr Oak (in a previously unpublished manuscript).  In Burr Oak, Pa Ingalls was to help run the tavern in town, and Ma was to fix meals for those who stopped to sleep in the facility, or who just happened by for a meal.  But the family was not paid for their work, and they were left to do much of the work themselves even though the agreement was "to help."  Disenchanted the Ingalls moved to an apartment two lots over, above a grocery store, and finally to a house at the edge of town.  It is that house, owned by a Mr. Bisby, where baby Gracie was born.  But when she was just a few months old, the family returned to Walnut Grove and eventually to DeSmet, South Dakota where Ma and Pa Ingalls lived for the rest of their lives.  When the family left Burr Oak, it was during the "time between two days" -- meaning they left in the middle of the night.  Pa could not pay the rent he owned the house owner.  The owner had threatened that Pa must pay before he left or he would have the sheriff hold his horses.  So Pa took his family and they left without being seen.  Indications are that Pa did make the debt right, but there is no absolute record of that.  Burr Oak is not the only connection between Iowa and the Ingalls family.  The family was living in South Dakota when Mary (Laura's sister) lost her sight as a teenager.  Mary was sent to Iowa where she attended school at the Iowa College for the Blind in Vinton. Information about Mary's days in Vinton may be found in an article "Vinton School for the Blind Mary Ingalls Era 1877-1889" on the Museum of the American Printing House for the Blind site.

Even though Laura Ingalls Wilder did not publish information about the Burr Oak community, the community and the directors at the Burr Oak Museum have researched and showcase the connection.  On a recent September day, a friend and I headed out to visit the Burr Oak Location. 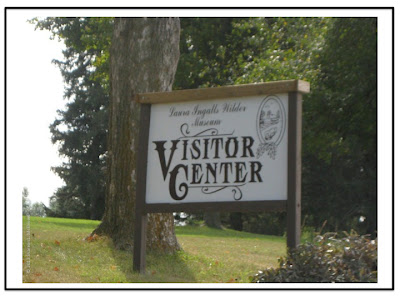 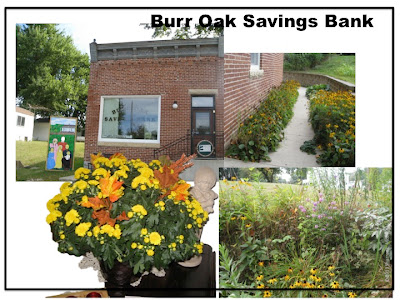 The Burr Oak House (Masters Hotel) is on the west side of the street and the renovated and restored Burr Oak Savings Bank is on the east side.  Visitors to the center go to the old bank building first to pay for the museum admission and to visit the gift shop.  From there a museum tour guide is available to guide visitors through the hotel.  The approach to the side door is lined with prairie flowers, bursts of yellow, and coneflowers, as well as others that I could not identify.  After our visit to Burr Oak, and later in the weekend my friend brought, as a hostess gift, the yellow planter/flowers in the lower left corner of this collage.  Each time I see those flowers in my house, I think about something new that I heard or learned in Burr Oak.   The photo board to the left of the building was created by a local artist, Nancy Sojka who was inspired by the art work of Cheryl Harness. 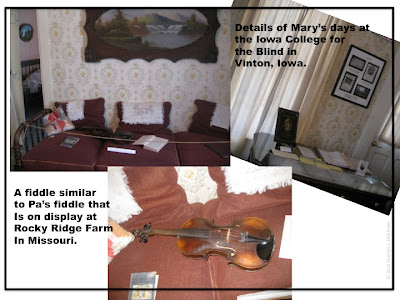 Pa's fiddle is one of the most recognizable items - many children who read Laura Ingalls Wilder remember the scenes in which Pa is playing his fiddle.   For many years (including 1947)  Pa's fiddle was in Memorial Hall in the Museum of the State Historical Society at Pierre, South Dakota.  During an annual concert someone would use the fiddle to play the old songs Pa used to play.  Now the Laura Ingalls Wilder Historic Home and Museum in Mansfield, Missouri has acquired Pa's original fiddle and has it as part of their collection.  Over 127 songs are referenced in the Wilder books.  Several CD's have been produced showcasing Pa's fiddle music. 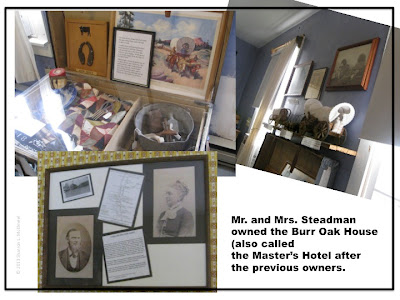 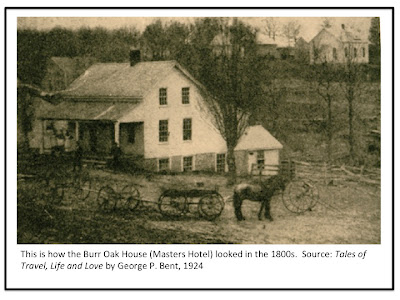 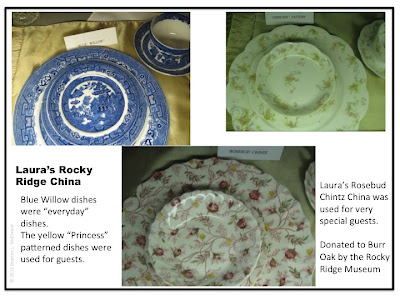 Since I enjoy having special dishes for special occasions I enjoyed seeing a place setting of the dishes Laura had at Rocky Ridge.  These dishes were certainly much fancier than the ones the family would have used in Burr Oak.  You will see later in a picture that the Burr Oak House (Masters Hotel) set the table for the evening meal with plain white plates and it seems tin cups were used for drinking.  Certainly not these beautiful china dishes used later in Laura's life after she married Almanzo and settled on their little farm, Rocky Ridge Farm, in Mansfield, Missouri. 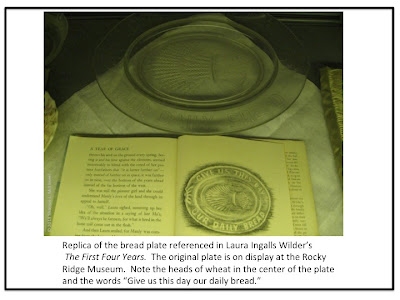 At Rocky Ridge Laura also had this bread plate, decorated with heads of wheat and words circling the plate "Give us this day our daily bread."  In her book The First Four Years, Laura describes the plate as being oval but the plate exhibited at Rocky Ridge and a duplicate exhibited here is much rounder than what one would describe as oval.  In 2009 Cheryl Whitlock wrote an article "The Mystery of the Oval Glass Bread Plate" on her site Beyond Little House.  In that article she examines the mystery surrounding the oval description and the round plate on display. 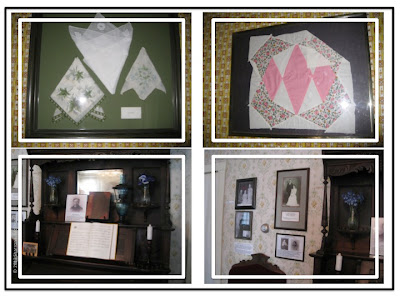 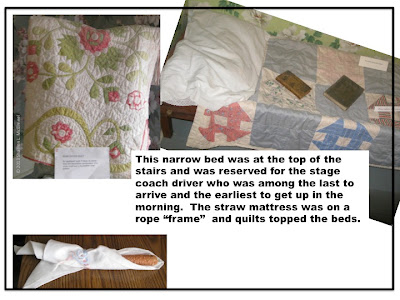 In addition to the quilt patterns which I found interesting, the lower left hand corner shows Laura's corncob doll.  It is simply a corn cob, with two black dots for eyes, wrapped in a white hankerchief type cloth.  Later she was given a coveted rag doll that she named Charlotte. 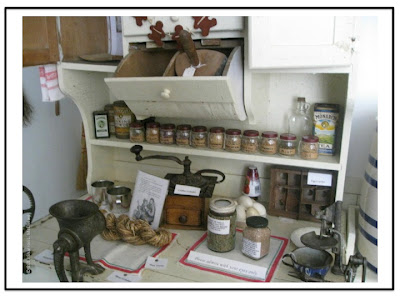 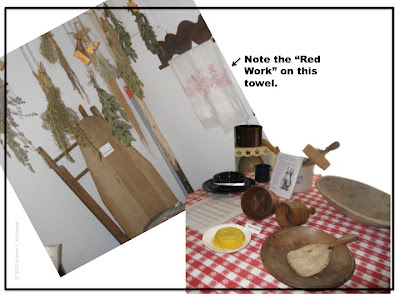 One thing that I missed seeing during this trip that was on display the last time I was in Burr Oak is the "red work" that Laura and her mother and sister embroidered throughout their life.  In this picture you can see one example of the red work.  Red work was very popular in the 1880s (to about the 1920s but it is gaining a renewed popularity in this decade). Red cotton embroidery floss was often the only color available as other colors were only available in silk floss making it more expensive.  Patterns were stamped on muslin and an outline stitch (actually called the Kensington stitch for a girls school in England) was used to embroider the design onto the muslin.  Red work was used to decorate towels, pillow cases, scarves for dressers, luncheon cloths, and so forth.  Girls as young as 5 and 6 were taught to embroider red work.  Since Laura was born in 1867, it is doubtful if she would have been doing red work when she lived in Burr Oak as the family was in Burr Oak in the late 1870s, a full decade before the popularity of the fashionable "fanciwork" would have become popular.  Laura would likely have created some red work later in her teens, although I don't believe that has been documented. 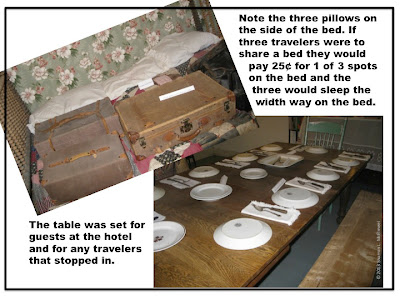 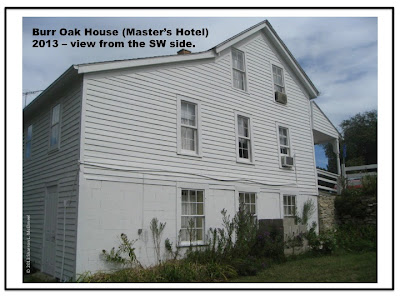 Laura wrote her first book when she was in her late 60s.  An unpublished manuscript, Pioneer Girl, became the basis for her first children's book, Little House in the Big Woods, which drew from her original manuscript.  Later she drew from Pioneer Girl for the years that she wrote about in her continuing series.  In Pioneer Girl Wilder does speak of living in Iowa.  The South Dakota State Historical Society Press apparently has obtained the rights to that original manuscript and is preparing an annotated publication which hopefully will be released in 2014.  The historic society press has a website The Pioneer Girl Project, where questions surrounding the life of Wilder and notes about the progress of the book's publication are announced.  Of course there are dozens of other websites focusing on the work of Laura Ingalls Wilder - a search of the Internet will turn up many of them, along with Wilder's books as well as those researched and written by William Anderson who wrote his own biography of Wilder, Pioneer Girl: The Story of Laura Ingalls Wilder (HarperCollins, 2000).  In 2002, Cynthia Rylant's book Old Town in the Green Groves: The Lost Little House Years (llustrated by Jim LaMarche) was published by HarperCollins.  The book was meant to fill in the gap of the years Laura did not write about but reviewers generally felt it lacked the intimacy with the times that Laura had in her written stories.  Old Town in the Green Groves seemed more fact reporting than storytelling.
Fans of all things Laura Ingalls Wilder will be eagerly awaiting the publication of Pioneer Girl.  And real fans will also not want to miss visiting Burr Oak, Iowa, one of Laura Ingalls Wilder's childhood homes.  Burr Oak's Laura Ingalls Wilder Park & Museum website is at www.lauraingallswilder.us/‎.

Posted by Sharron McElmeel at 11:46 PM

Really very happy to say,your post is very interesting to read. I never stop myself to say something about it.You’re doing a great job. Keep it up. Cherokee Inn Hotels in Cherokee IA

I've been able to visit Burr Oak, Walnut Grove,and DeSmet. Each museum has a different "flavor" but I enjoyed all of them. Hoping to visit the remaining sites and revisit those I've already visited. I was also able to meet Melissa Gilbert at a booksigning. While I have never been a fan of the TV series, I did enjoy her talking about her experiences while the show was filmed.

This post is really an amazing.I found some interesting thing about it.Thank you for sharing this wonderful blog with us and also keep sharing.
hotels in iowa
motels in iowa